I am away this week at the She Speaks conference and have decided to re-post my second most viewed blog post (according to the stats!). It was originally posted on March 20, 2012. I’m reposting it after some edits.

I’ve just come home from our Women’s Bible study: “David – Seeking a Heart Like His” by Beth Moore. And today’s video lesson was on “Family Calamity”. First thing I did when I got home was to look up the word “calamity” in my english-german dictionary. It’s simply “Katastrophe”. It all makes sense now (big smile here!) I hate it when I have to sit through an hour long lecture and then wait until I get home to look up a word that was the center of the lesson. Well, now I know it!!!

To give you a little background: we are studying the life of King David, and we’ve come to the chapters that talk about his family dynamics. His firstborn son Amnon raped his half-sister Tamar. Absalom, Tamar’s brother, hated Amnon for what he’d done to his sister. David had heard about the rape and was furious. But he did nothing. Nothing…

And so Absalom carried this hatred around for many, many years – at least eleven years. He harbored and planed revenge for a long time. It’s amazing how patient he was with his plan. He waited for the perfect moment. And that moment came. He tricked Amnon to attend one of his parties, and while at the party Absolom had Amnon killed.

Absalom then flees from his father and stays with his grandfather for a number of years. Then, finally, Absalom is allowed to return to Jerusalem, but King David still refuses to see him. After being in Jerusalem for two years, King David finally receives his son Absalom. But instead of a reunion and reconciliation it seems to be a King receiving his servant, and not a father receiving his son. I found the following picture of what could have/should have been. But sadly it was not. 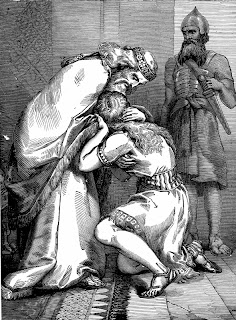 Absalom then gets the people of Israel to like him and they try to crown him as king. In the end it all backfires. Absalom dies in battle. And the hatred he harbored in his heart for so many years ends up costing him everything.

The thing that hit me most in this video lesson: Family Calamity “doesn’t have to be irreparable”. With humility and willingness to forgive, relationships can be restored. But if a family “relationship is irreparable, the individual need not be.”

“He does not punish us for all our sins;
he does not deal harshly with us, as we deserve.
For his unfailing love toward those who fear him is as great
as the height of the heavens above the earth.
He has removed our sins as far from us as the east is from the west.
The LORD is like a father to his children,
tender and compassionate to those who fear him…
Let all that I am praise the LORD.”
I do know that some relationships are only for a time, especially some friendships don’t last forever. For whatever reason, friendships can get damaged or they change because of moves and changes in our lives, and sometimes they are beyond repair.

But it’s different with family relationships. It’s so different. And since I cannot escape family, I’m kind of stuck there. BUT I don’t have to stay stuck as an irreparable individual! Thank you, Jesus!!!