Villa Eveline was very conveniently located: only about 100 m from the beach, and about 150 m from the entrance to the Jasmund National Park. And so the first chance I had, I went on a hike through the park. I didn’t realize that it was about 8 km one way! Twice I was able to go hiking in this beautiful park. I started out by going to the beach and walking the first km or so on the beach. 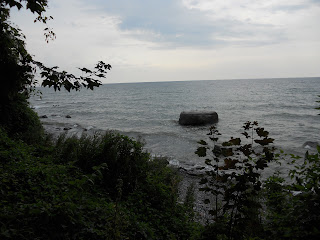 My first glimpse of the sea. 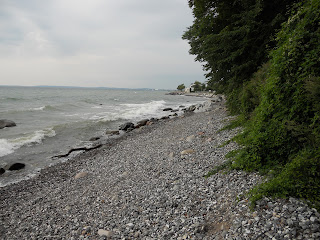 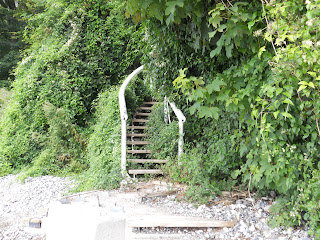 These were the stairs I came down. Very beautiful. 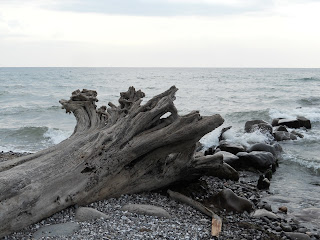 I saw a number of these huge trees that were lying on the beach and also in the park itself.

Just a short story about my first hike: I took the stairs down to the beach, but then I found some pretty rocks on the beach, and I started climbing and jumping from rock to rock. I got quite high up. And then as I jumped on one of the rocks I didn’t realize that there was a barely visible trickle of water coming down and the rock was wet. Guess what, I slipped, of course, and slid and slid until I was at the bottom, on the sand again. I looked awful, I will spare you the picture, even though I took one… But I also felt awful… Clumsy as I am I hurt myself. But since there was no blood visible, I decided to continue on my hike. I found the way up to the forest and walked the “Hochuferweg” for the rest of the hike.

Since I was by myself and didn’t have to talk to anyone, I was just in my own little world. I hiked and hiked and hiked, until I saw some signs, and when I did the math I realized that my hike would be over 8 km. But stubborn as I am, I continued on. My landlady had told me that there was a bus that I could take once I reach my goal. But I was determined to hike the way there and back!!! Well, with my own thoughts occupying my mind, I did not realize that it had started to rain. And when you’re in the forest, it takes a while to see any water coming down. But once the rain broke through the leaves, there was no stopping it. It was raining “cats & dogs”. I still had about 45 min to hike to my destination, and the bus stop. Was I ever grateful there was a bus stop! I was so drenched by the time I got to the bus that I was surprised the bus driver even let me on the bus. When I finally arrived at my room, I just walk into the shower with all my clothes on, since they needed a shower as well… Quite the adventure…

Once I was dry and cozy in my bed I realized that my head hurt and upon closer examination I saw that I had a big bump on the back of my head. Must have happened when I slid down on those rocks. And it occurred to me that God had sent an angel to protect me! At the end of the day I realized that it could have turned out very differently. But I’m very grateful GOD WAS WATCHING OVER ME! 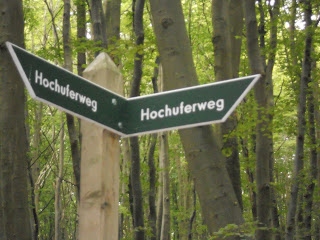 I chose to walk on top of these cliffs, the “Hochuferweg”.
The view from above was just breathtaking! 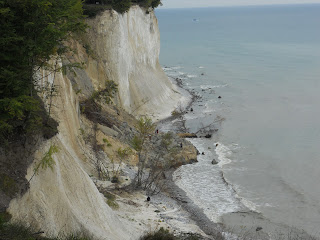 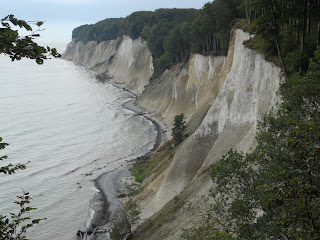 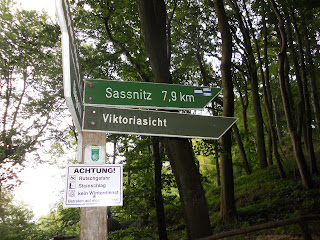 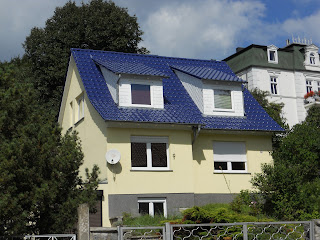 I took this picture because one of my daughter’s favorite color is blue. And I was just fascinated with the shiny blue roofs that a lot of new/renovated houses have on the island. They offer these roofs in other colors, too, but blue was used most often.