Skip to content
Do you know much about weeds? I don’t. Except that I dislike them with a passion.
I took a few pictures of my weeds and googled “prickly weeds” to see whether I would find a name for the ugliest of them all. I learned it is a thistle. I couldn’t really determine which one, but it is definitely a thistle that has been invading my garden again and again. 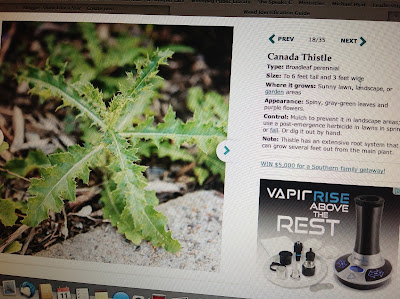 And by the way, did you know there is such a thing as smartweed, quickweed, pigweed, chickweed? I wonder who comes up with these names?
Yesterday I got my “weeding gloves” out, you know the ones that are so thick you can pull even the prickliest of weeds. I started at one end of my vegetable garden and worked my way to the other end.
I arrived at an area that was full of thistles. But at closer inspection I saw that some of them were growing out of the side of a root. There had been a thistle growing before, and I had “pulled” the weed, but only got the tip of the root. That tip had dried up, but the root was not dead.
A different looking kind of thistle was growing out of the root’s side. This one was bushier, a lot greener, and had hardly any prickles. Take a look: 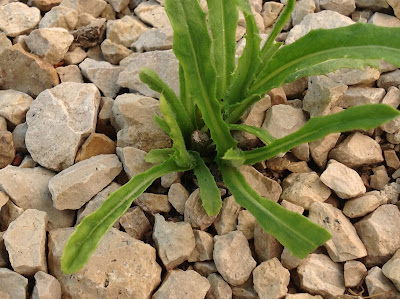 And here is a picture of the same kind of thistle, the one on the left is growing out of the “original” root and the other is growing from the side of a root. 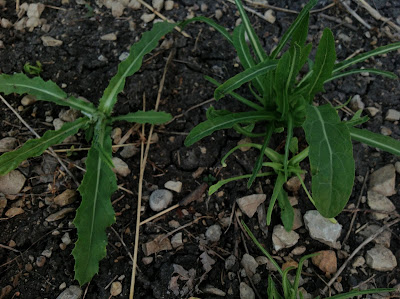 Same roots, different looking plants… Roots and thistles…
I had to think about our lives and the seeds we are sowing and the roots we are growing. When we attack a bad thought, a bad habit and try to remove it, do we take the time and effort to take out the root as well?
Did you know the roots of a thistle can be several feet deep? That would involve a lot of digging to get the whole root out. It’s so much easier just to pull on the weed, and it eventually breaks off. We think we have solved the problem because the thistle is no longer visible.
But guess what? A few weeks later a nicer looking thistle is growing out of the side of the same root. It has hardly any prickles, and is more pleasing to the eye.
This is a great picture for life as well. We attack the visible “problem” but don’t think much about the origin, the root of the problem. We remove the prickly thistle, and think we’ve dealt with it, we’re done. And within weeks we don’t even notice that we’ve got a nicer looking problem growing out of the same root. It’s still a weed, it’s only a nicer version of it…
Ralph Waldo Emerson said:

A tiny thistle seed can grow a root that seems indestructible.
Let’s not be afraid to dig deep and remove the root. I sure don’t want to be a prickly thistle. Do you?