Skip to content
In my previous blog entry I talked about the lessons of second chances in the Bible. But I thought I’d share a few second chances I’ve received in my own personal life.
There is the second chance of motherhood.
I had lost 2 babies in miscarriage before I had my oldest daughter 5 weeks too early after a very difficult pregnancy. And to this day it is a miracle to me that I am a mother of 3 healthy kids. My road to motherhood was very difficult, but through it all I learned the value of being a mother.

My baby girl on her second day at the hospital in Worms, Germany.

There is the second chance at home ownership.
The first house that we ever bought was a complete disaster. From the location to the house itself it was just bad, bad, bad. And after that disaster I swore I would never buy a house again. But here I am, and only by the grace of God, in a very nice and small, but very comfortable house. I always joke to my kids that our house is the prettiest house on the street.
And even here, when I made the big mistake and killed my whole front lawn on one of the busiest streets in the area, I got a second chance to do something with my front yard: plant some shrubs & flowers and put in a new lawn. 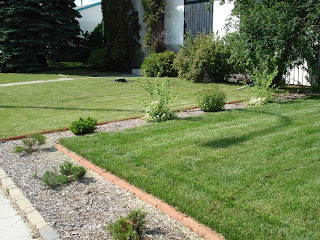 That was in 2007. Now those shrubs are almost fully grown.
In 1995 I got a second chance at a career. Who would have thought that a single mother of 3 (ages 6, 4 and 2) would get that chance, after being away from the profession I so love. After about two years of working for a temp agency and a temporary job at Boehringer Mannheim, I finally received a permanent job at Freudenberg in Weinheim. And what a blast that job was! I so enjoyed working there for 5 years. It was the most challenging and satisfying job I ever had. The things I learned there… The people I met there… What I loved the most was the international flair that existed in that company. I was able to use my English there A LOT! I even learned to speak Russian and Italian. What a gift for life that was!
There is the second chance at Living in Canada.
20 years ago we came to live in Canada for the first time. We were excited about the opportunities and the new beginning. But it did not last. After only 4 ½ years I packed a container and moved back to Germany with my kids after my marriage ended in divorce.
After 7 years in Germany we got a second chance to return to Canada, and here we are 9 ½ years later!!! What grace, what mercy!!!
There is the second chance of being part of a church.
This is one is the biggest blessing to me & my kids. After the divorce we were not able to connect with a church family. I never quite stopped reading the Bible. I had always been very fascinated by the Bible. But my prayer life was basically non-existent except for those “help me, Lord” that I uttered constantly.
When we returned to Canada we were very overwhelmed by the friendly welcome we received at the church we came to on our first Sunday back in Canada. We were welcomed with open arms, no questions asked. And this is and will be the biggest gift God has ever given us to this day. This friendly welcome was a start to a whole new chapter in my life.
Second chances! I so love and appreciate them! They are so much sweeter to me because I value them so much more! And a lot of times I get to do it right the second time around. No, not always, but a lot of times. Thank you, God, for second chances!