Just bear with me as I write another post on the 2013 Winnipeg Real to Reel Film Festival. Even though this event is in the past we are still working many hours to finish it. It will be another few weeks until we finally can close the door on this one, take a break for only 3 months or so before we start working on the 2014 WR2R Film Festival. 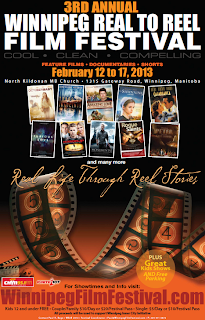 I just wanted to recap a few highlights from my point of view. It’s been a few weeks since the 2013 WR2R Film Festival, and so the dust has settled and the head has cleared (I hope)…

Setup
I don’t ever remember working on an event as hard as this one. When Monday, Feb 11 came around and we were setting up the theatres, it all seemed so unreal that we were actually there. We had arrived! The set up itself was a big highlight for me. To see it all come together was huge! To transform rooms that are used for so many different things into theatres is very exciting! For the first time we had a Real to Reel Cafe. And it got used a lot! Very exciting!

Attendance
Our opening nights have not been big in the last 2 years. But this year was different. There was a bigger buzz about it and it was reflected in the attendance of the opening night! Wednesday’s attendance dipped a bit, but then came Thursday, which was Valentine’s day, and the attendance just kept climbing and climbing, until we reached a gate attendance of 3,065 on Sunday night!!! I’m still in awe of how many people came through the gates!

Volunteers
I will be forever grateful for all the volunteers that had signed up to help. In the end we had 93 people helping us!!! To manage that many volunteers seemed a bit daunting. My prayer each day was that no one would cancel or get sick and that everybody would be on time! And my prayers were answered! With only 2 exceptions, everybody showed up on time and no one canceled. And even the 2 that were coming late, let me know so we were prepared for it. Isn’t that in itself amazing???

Last Sunday, we had invited the volunteers to a thank-you lunch. And as I stood there at the kitchen window looking over the tables of so many of the volunteers, and in my mind I saw all the ones that were not able to be there, I just had to thank God for this amazing group of people who had served with so much joy and enthusiasm. There was such a great atmosphere in the room, so much laughter! And so many expressed their desire to help out next year again! Thank you, God! Thank you for answered prayers!

Films
Of course I need to mention the films itself as a highlight. After all, this was a film festival! The great thing about being on the Executive Team of the WR2R Film Festival is that you get to watch all the films ahead of time. For so many months I was already excited about the great films on our list. But I could not tell too many people about it until the lineup was official!

The bar has definitely been raised when it comes to the quality of films, documentaries and short films/short documentaries. We were very blessed by the material that was submitted to the 2013 film festival. We had great short films submitted. It amazes me each time how a story can be packed into 5-10 min of film! And 2012 was a very good year for feature films as well.

I was able to observe different face expressions when I saw people leave the theatres. So many changed lives due to what they’ve seen! Horizons were widened by the many documentaries we were able to show. We heard from many people about the lineup of films, and they were encouraging comments!

Filmmakers
We had 6 filmmakers fly out to Winnipeg to be there at the screening of their films. They came from as far as Vancouver, California, New York, London, England and Hongkong. They came to cold and snowy Winnipeg!!! This was February after all! Some of the films were screened for the very first time. That was so exciting to see! And for the first time in 3 years we had larger crowds for the premiere screenings of documentaries. At one point on Sunday night we even had to do a venue switch because of the large crowd that had come to see “Living with Lava.”

We are still waiting on the photos of Focal Photography by SND. Unfortunately I didn’t take any pictures during the film festival. But as soon as they arrive we will post on our website, on our facebook page and I’ll also post some here.

As we wrap up this year’s film festival, my heart is flooded with gratitude! I’ve experienced God in a whole new way. Oswald Chambers wrote in “My Utmost for His Highest” the following:

“We plan and figure and predict that this or that will happen, but we forget to make room for God to come in as He chooses. Would we be surprised if God came into our meeting or into our preaching in a way we had never expected Him to come? Do not look for God to come in a particular way, but do look for Him… No matter how well we may know God, the great lesson to learn is that He may break in at any minute. We tend to overlook this element of surprise, yet God never works in any other way… Keep your life so constantly in touch with God that His surprising power can break through at any point. Live in a constant state of expectancy, and leave room for God to come in as He decides.”

I constantly have to think about the Bible verse in Ephesians 3:20. It was our theme verse for the 2012 WR2R Film Festival. And this verse sums it up once again:

“Now all glory to God, who is able,
through his mighty power at work within us,
to accomplish infinitely more than we might ask or think.”
Ephesians 3:20 New Living Translation